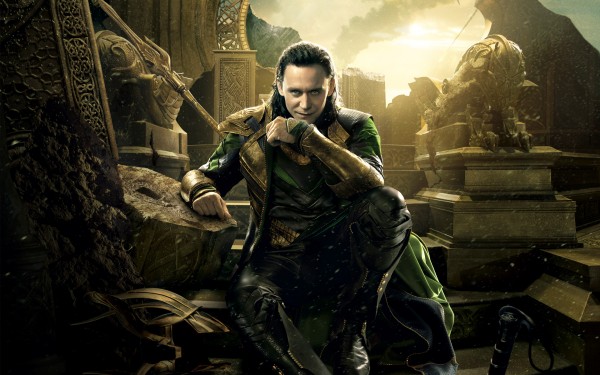 The Norse God Rap Battle: Loki vs The Pantheon

The following is a genuine recounting of a part of the Norse Mythology. There exists a poem called Lokasenna in which Loki (you know, the super sexy Tom Hiddleston from the Marvel franchise one) is hanging out and having a few drinks with some of the Æsir (gods), but is kicked out after inexplicably murdering a waiter that they were all being really nice to. After a little time away, presumably stewing in anger, Loki returned to throw down the gauntlet and show the gods some serious smack talk. All I can say is god damn, this would have livened up The Avengers movie.

What follows is a genuine account of the resulting quarrel.

Loki bursts in and tells the gods that he’s thirsty. No one responds. Loki calls them arrogant and demands that the gods give him a seat at their table, but they refuse. Then Loki is all like ‘Hey, Odin. You once said you’d never drink unless I was welcome to join you’, so Odin tells his mute son to give up a chair for Loki. Loki then proposes a toast to the gods, but totally disses Bragi, who, in turn, tells everyone that he’s a totally nice guy. Loki then tells Bragi that he’ll always be poor and that he’s a pussy. Bragi then says ‘If we were outside, I’d cut your fucking head off,’ and Loki is all like ‘Big man when you’re sat at the table, you bench ornament. If we were outside, you’d totally bail.’

At this point, the goddess Iðunn interrupts and tells Bragi not to let Loki stir up shit. Loki then calls Iðunn a massive man-crazed slut who fucked the guy who killed her brother. Iðunn says she doesn’t want any trouble, and that maybe everyone’s just had a little too much to drink. Gefjun then asks Loki what the deal is with starting shit, and says that Loki should know that Bragi is only playing. At this point, Loki is like ‘Whatever, bitch. I know you once totally spread your thighs for a white boy just because he gave you jewellery.’

Now, Odin gets pissed. He says ‘Loki, don’t fuck with Gefjun. She’s almost as smart as I am’, and Loki calls him a bad leader, giving out honour to pussies. At this point, Odin responds with ‘Even if that were true, you once spent eight winters beneath the earth as a woman milking cows, and during this time, bore children… which is totally perverse,’ and Loki is all like ‘Yeah? Well you once practiced effeminate magic on a forbidden island, and then traipsed around man’s world disguised as a wizard, which I think is totally perverse.’

Frigg, Odin’s wife, now joins in, telling everyone not to bring up shit from the past, to which Loki responds by telling everyone that Frigg once cheated on Odin with both of Odin’s brothers. Frigg then tells Loki that ‘If my son were here, he’d fuck you right up’, but Loki just laughs and says ‘Yeah, but he isn’t here is he? Because I killed him.’

Frejya now joins in and tells Loki that he must be mad to be trying to piss everyone off, and so Loki asserts that Freyja has probably banged everyone in the room. Freyja calls him a liar and says that he’s just trying to be a dick, and Loki says that she had sex with her own brother while people watched and laughed, and that she farted while she was doing it. Freyja’s dad Njörðr then tells Loki that no one cares if a girl wants to get with guys who aren’t their husbands, and says that the real asshole in this situation is Loki himself.

Loki then tells Njörðr to shut up, and says that while he was a prisoner of war from the Vanir gods, they all took turns pissing in his mouth. Njörðr tells Loki that he doesn’t care, and that everyone likes him and his daughters. Loki agrees that his kids aren’t too bad, but points out that he secretly fathered one of them by fucking his own sister.

Tyr now defends Njörðr’s son Freyr, but Loki is all like ‘Shut up, liar. You’re just pissed because my wolf-son ate your hand’, and Tyr says ‘Well, I may have lost a hand, but you’ve lost a son.’

Tyr reminds Loki that his wolf-son, Fenrir, will be remanded in shackles until Ragnarok, when he’ll break out and eat the sun, and Loki tells him to shut up again, saying that he slept with Tyr’s wife.

Freyr then chimes in and threatens Loki with the same confinement as his son, and Loki responds by saying that Freyr gave away his sword and will die at Ragnarok because of it. Byggvir, a servant of Freyr, chimes in with ‘If I were as noble of lineage as Freyr was, I’d totally fuck you up’, and Loki calls Byggvir a dog and ridicules him for always sucking up to Freyr. Byggvir then asserts how proud he is to get to hang out with gods, but Loki just tells him to shut up again, and says that he’s a terrible waiter, and a pussy in battle.

Heimdallr now joins in and tells Loki that he’s drunk and stupid. Loki bids him silence, and starts to totally rip on his career choice as a watchmen of the gods. The goddess Skaði now interjects and basically says ‘Yeah, you’re laughing now, but you wont be when we bind you to a rock using your children’s intestines as rope’. Loki says he doesn’t give a shit if that’s what happens, and reminds Skaði that he helped kill her father. Skaði then basically calls Loki a dick. Loki responds by saying that Skaði once had sex with him.

At this point, Thor’s wife Sif decides to try and bring a little peace and pours Loki another drink in a crystal chalice, saying that she doesn’t have a problem with him; but Loki, still being a dick, asserts that Sif once had sex behind Thor’s back with, you guessed it, Loki himself. Beyla, another servant of Freyr, then says ‘You hear the mountains trembling, buddy? That’s Thor coming to beat the shit out of you.’

Loki tells Beyla to shut up (like it’s his god damn catchphrase), and calls her a shitty waitress.

At this point, Thor shows up, and he is, like, super-pissed, you guys.

Thor tells Loki to stop talking and says that he’ll use his hammer to knock Loki’s head off. Loki responds with ‘What’s the problem, buddy? You won’t be so tough at the Ragnorak when you’re pitted against my wolf-son after he eats your dad’. Thor then threatens Loki with his hammer again, and says that he’ll knock him so far east that no one will ever see him again, but Loki says not to mention ‘the east’ as it’s where Thor supposedly went on his hero’s journey, but actually was a total pussy, and hid inside the thumb of a glove, cowering. Thor tells Loki to shut up (again) and says that he’s going to hammer every single one of Loki’s bones. Loki attacks Thor’s intelligence and says that he won’t kill him. Thor says that he will, again, with his hammer.

At this point, Loki sort of gets the message and is all like ‘I’m just speaking the truth, man; but whatever, I’ll go… but I hope fires burn everyone’s stuff.’

Weirdly, Loki then disguises himself as a salmon and retreats into a waterfall, but is found by the gods and, as they had earlier warned, is tied up with the entrails of his son. A venomous snake is then affixed over Loki’s face, dripping poison, and his wife is tasked with sitting beside Loki, catching the drips in a bucket, save for when she has to intermittently change buckets, causing the drips to land on Loki’s face, making him writhe in agony.

As I said, this poem is called Lokasenna, and you can find out about it here. I assure you that this was an accurate retelling of the story, which begs a simple question:

If all religions are made up anyway, why the hell would anyone pick one as uninteresting as Christianity?

A few of my better posts, My Thoughts on Religion and Philosophy, Random rubbish that I can't think of a category for