So What Exactly Is All This ‘Partying’ Nonsense?

If brief radio flickers and supermarket PA systems have taught me anything about modern music, it’s that kids like to party; the shards of Kesha and One Direction that aggressively force their way into my unwilling ear drums from time to time have certainly shown me that much. However, they never really say ‘drinking’ or ‘dancing’ or ‘hanging out with strangers in awkwardly forced social interactions’, they simply say ‘partying’. Now, I’m not entirely sure when the noun ‘party’, as in an assembly of people meeting with a common goal, be it political, social or celebratory, transformed into this awkwardly misapplied verb that I, for one, feel totally ill-equipped to define. All I know about ‘partying’ is that the significance placed upon it makes it fraudulently seem like some sort of animalistic ritual of transcendental meditation that culminates in an out-of-body experience, or an ascension to a new state of being (which I suppose is true, if you consider ‘hungover’ and ‘brimming with shame’ to be a state of being).

Now, I’ve been, what some might refer to as, ‘partying’ twice in my exciting existence. The first time, my girlfriend and I went to a club; we trundled to the bar and paid about nine hundred pounds for a couple of Coca-Colas. She had to pop to the bathroom, and so I decided to wait outside and take a seat on a bit of railing that overlooked the dance floor. At this point, a burly security guard grabbed me by the arm and dragged me out, shouting ‘Climbing on the furniture? I think someone’s had enough tonight!‘, a sentiment which, if I’m quite honest, I was happy to not disagree with. It was loud and seedy and dark and just not nearly as enticing as the movies and music videos make it out to be. They can show a montage of slow motion fade outs with a blaring dubstep soundtrack, but the reality of the situation is totally different, like when they show beautiful, spontaneous love scenes in films, bereft of any mention of condoms or cleanup.

The second time I went ‘partying’, my brothers insisted I join them for a night in London, and after an hour of queuing outside and (what seemed like) an hour of queuing at the bar, I hurriedly had to take my already paralytically drunk brother to the hospital. Like my first time partying, this was obviously not what I had in mind when Kesha whisper-yodelled sweet nothings in my ear about vomit and sex.

So, my question is this: at what point in attendance of both of these parties, was I actually ‘partying’?

I’ve never been a particularly ‘cool’ person, and I’m cool with not being cool (which, ironically, is what makes me so gosh darn cool); but what I don’t understand is all the ‘cool’ things that ‘cool’ kids do that just sound simply awful. It’s meant to be a symbol of status to stay up all night partying. It’s meant to be like saying ‘Screw you, society. I am my own person and I shall not be bended and shaped by your rules and restrictions!’, when to me it just comes out a little more as ‘Screw you, mum. You aren’t here to tell me when to go to bed anymore. I can do what I want!’

I’ve had insomnia since I was a child, and not the edgy, badass ‘waiting until midnight to post a Facebook status about not being able to sleep before cuddling up with a teddy bear and immediately drifting off’ insomnia, but the other kind, the kind that kind of sucks. When people ask me why I look so tired and I tell them that I went to bed at 6am that morning, they get so excited, awaiting some crazy story of drunken orgies and falling down staircases. It’s not my fault if they think I’m weird for reading Wikipedia while talking to my cat all night; I’m not here to impress them. Why is ‘partying’ the only acceptable excuse for staying up late?

There’s also the whole business of partying so loud and so boisterously that the police wind up getting involved, which is supposed to make it extra cool; but is it actually cool to be so noisy that your neighbours phone someone for help? Poor Mr Gunderson. He’s been eyeing up the shotgun in his hunting cabinet for three hours now as the kids next door jump up and down to their god awful pop music. Is it really his fault if he leans out the window and squeezes off a shot? He does, after all, have a clear line of sight to their living room. 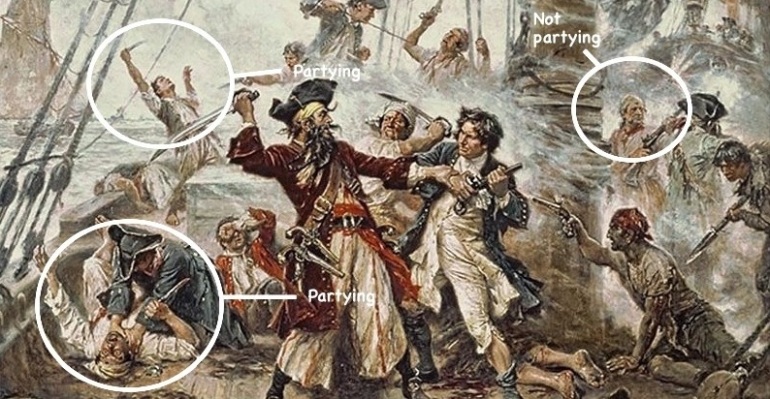 Now don’t get me wrong. If Justin Bieber wants to hang out at parties with his concernedly older friend Usher, that’s fine. If One Direction want to go ‘crazy crazy crazy’, like a hoard of escaped lunatics, presumably eating road kill and hurling faeces at strangers, that’s fine too. I’ll even let Kesha bang strangers in the back of vans, and let Taylor Swift host sex parties with hoards of people dressed up as farm yard animals (have you not seen that video? It’s something like that), and that’s all fine too. What I’m not fine with, however, is how much antagonism I receive from the people around me who see this abstract notion of ‘partying’ as the thing that one does in order to enjoy life. I’ve clearly pointed out that I don’t really understand what ‘partying’ is. If it’s just doing something that you enjoy, then surely the House of Cards marathon I partook in last night as my girlfriend half slept / half drooled on my shoulder was a bloody bonanza? I enjoyed it a lot more than I would have were I out on the town being elbowed by strangers, as Rihanna loudly questioned the size of her boyfriend’s penis over the sound system.

But maybe it’s not that. Maybe ‘partying’ is simply the act of being at a party; so if the partying begins when you arrive at the party, does it last the entire duration of the party? Are you partying as you queue up at the bar for an over priced drink, or drunkenly pissing either side of a urinal? How can a verb be so ambiguous? If you took a photo of a dance floor party, and the four people in the middle had their arms up in the air, spilling their drinks, and grinning from ear to ear; and the one guy on the left was just absent-mindedly staring into space, standing still, and about to sip his gin and tonic, would you say that they were partying and he wasn’t? If it’s simply a question of being at the party, then are you still partying if you’re not enjoying being at the party?

What about me? The guy awkwardly leaning against a wall, smiling at anyone who makes eye contact and then hurriedly turning away, and sipping my Coca-Cola? Am I partying? I don’t feel like I’m partying.

In contemplating this whole concept, I’ve decided that, to me, ‘partying’ will just be whatever I want it to be. If I want to party, I’ll load up Netflix and sit on the sofa in my underwear; and if I want to party ‘hard’, I’ll just turn up the volume and throw shoes at my cat, just like Kesha would have wanted.

So, who wants to come over to my place for a crazy, wild, so off-the-hook that it’s landed in a puddle of enthusiasm on the floor beneath the hook party? I just got the new series of Sherlock on Blu-ray, and I might need a hand reorganising my kitchen cupboards.

A few of my better posts, Articles I've written professionally